reflections on retiring from Anonymous

An episode in which I met arrested hacker & Antisec member Jeremy Hammond appears in the latest issue of Rolling Stone (PDF). Though Janet Reitman wonderfully explains a remarkable amount of background about Anonymous in her profile, I think this incident deserves a fuller treatment than she was able to provide.

I returned to Chicago in the fall of 2011, after a year in the desert of Washington state, tired but excited by my work as a full-time-and-them-some volunteer net activist. I’d spent August helping organize Anonymous’ OpBART in San Francisco, a campaign against a minor bureaucrat’s decision to shut down the transit agency’s cellular network to prevent a protest. Coming on the heels of Egypt’s Internet blackout, the multi-week Internet-meets-real-life protests captured national attention at a time when Occupy Wall Street was little more than a low-volume hashtag. I’d been the “namefag” for OpBART, doing dozen of media interviews (”fag” is Anonymous slang for “person”: someone who draws propaganda pictures is an “artfag”, a good writer is a “writefag”, etc.. A “namefag” is someone who uses their real name.). The necessities of moving and securing income kept me from doing much work on #OWS, but I was heartened to see others taking up the cause. I did attend a rally or two in Chicago; yelling at buildings in real life was a wonderful, invigorating contrast to 16 hour days of organizing from my remote Internet fortress, and it felt good to just be another protester.

I met Jeremy at Occupy Chicago during the last week of October (though I didn’t learn his name until much later). I’d dressed up for the occasion, reviving a costume & sign I’d first used in 2008, when I’d marched around downtown Chicago for hours by myself in protest of the TARP bank bailout (the yellow jacket is the uniform of floor traders; I found it at a thrift store). 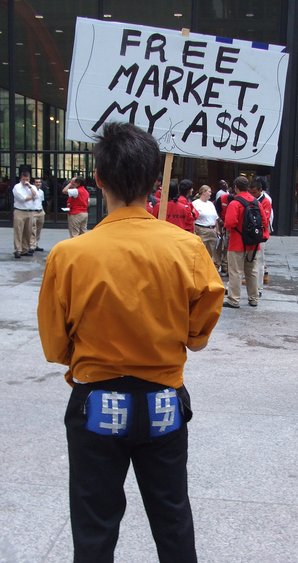 When I arrived at Occupy dressed up to the nines (or down to the dollars, perhaps), I quickly got into conversation with Occupiers. I’m not shy about my participation in Anonymous, and I talked openly, hoping to forge connections between online and off. As I stood around chatting and sign waving, a young crust punk blurts out “Yeah, I’m in Lulzsec!” - literally the first words Jeremy said to me. I ignored him - there are a lot of crazies and wannabes in Anon, and I figured there was no way anyone actually in Lulzsec would have such terrible opsec (opsec or “operational security” is the art of keeping secrets - spycraft, basically. Needless to say, it does not involve confessing to major crimes on a public street.). The punk & I chatted about Anon, and net activism, and Occupy, and he gave me battered copies of a zine he had written (which I kept but didn’t read). Jeremy talked to an older activist friend about his time in prison and his difficulties on probation, and they listed off the comrades who were in or out of jail. My sense was this was someone who expected to go back - that you struggled against the man until you got busted, did your time, and picked it up again when you got out.

That Friday was Critical Mass - a global series of anarchic group bicycle rides that are part rolling party, part protest. CM has deeply influenced my politics - being the change we wish to see in the world is a lot more fun (and effective) than fighting for a future utopia that never arrives. The Mass holds a cheer vote at the start of the ride to decide on a route, but the hundreds of riders can be hijacked by just a few people at the front. Jeremy and I had decided to do exactly that - with the help of a few of his buddies, we led the ride towards Occupy in a show of support. A block away, our path was blocked by three bike cops and a police SUV, perhaps fearing the 40 Occupiers were about to become 1,000 Occupiers-with-bicycles. After a brief argument with the cops, Jeremy started chanting “Straight! Straight!”, a call that was taken up by his friends. Meanwhile, I tried to persuade the ride to simply go around and pass Occupy on the cross street - no one was having any part, so I went alone. I came up behind the cops and lifted my bike overhead in a Chicago holdup just as the police relented and the ride rolled through with Jeremy at the front. I still remember the look of shock and surprise in his big, young eyes.

Other than a few brief encounters with “burn” on Indymedia’s #occupychi IRC channel, I never saw him again.

I’d forgotten about Jeremy until March, when news of his arrest and Sabu’s betrayal broke. I absolutely believe Antisec was an FBI construct from day one, designed to scare the American public and win money and surveillance powers from a compliant Congress. Whether sup_g’s situation meets the absurdly high legal standard for an entrapment defense is besides the point - without a doubt he was lured and manipulated into a series of ideologically motivated hacks over a nine month period during which FBI Director Robert Mueller repeatedly testified about the looming cyber threat.

I know first-hand how effective this manipulation could be. Despite being well-known and quite vocal about my desire not to participate in illegal activities, I found myself in chats with Sabu in late February 2012, a few weeks before the arrests. In retrospect, it should have been obvious I was being set up, but exhausted from work on ACTA, I didn’t see it at the time. Fortunately the FBI shut down Sabu before I wound up ensnared in trouble I never sought. Jeremy, more ideological and hardened by time in prison, must have been drawn like a moth to the Antisec flame.

I’ll never know why Jeremy told me he was in Lulzsec. Maybe it was hard for him to see someone else get attention for a silly costume when he was risking so much by hacking. I’m a privileged rich kid from the suburbs, and I’ve never spent time in jail - ironically, the only time I’ve even been handcuffed was for dumpster diving. I have tremendous respect for people like sup_g and CC3 who are willing to put their freedom on the line for what they believe. But the price of their freedom is perfect secrecy - you absolutely cannot care about recognition and fight in the manner that they do.

The Brand Called Us

I’ve been called a “fame whore” for the press work and conferences I’ve done. Nothing could be further from the truth. I’ve never, not once, reached out to a press contact for personal coverage. To be honest, I’m mystified by the desire to be famous - I’m a private person, and the attention that comes with fame seems like a pain in the ass without any real benefits. I do have a knack for public speaking, and sometimes that’s what the situation calls for - but I’ve always seen these occasions as a chance to inspire others to get involved.

In 1997, Fast Company magazine published an incredibly popular article The Brand Called You. The piece was an homage to fame that proclaimed that success in the Internet era would come not from climbing the corporate hierarchy but by turning ourselves into personal brands and unabashedly marketing our successes. Whether this article set the tone for the next 15 years or simply captured an inevitable zeitgeist, I don’t know, but I remain as disgusted by it now as I was when I was 19. 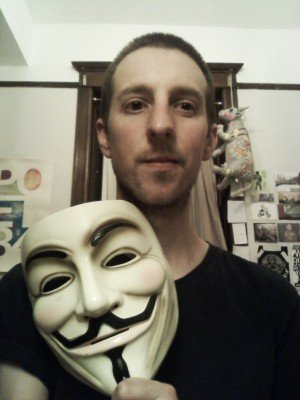 I’ve been saying the same thing for years - that we are being royally fucked by the people in power, that our institutions have failed us. That we need to get off the couch and take charge of our destiny by living right now as if the better world we desire already exists, like Jeremy did. Unlike him, I believe what’s needed is not a revolution, but a rebuilding which will take the rest of our lives. But before I found Anonymous, no one listened. I’ve written things and done things that other Anons have told me I “have to put my name on”. No. As a Telecomix agent told me during the #Jan25 revolution: “Fuck credit”.

Four years ago, I promoted my TARP protest with printed fliers that said “Tell the Internet! Bring your Friends!”. No one came. I’ve found my Internet. I’ve found my friends. I’ve found The Brand Called Us.

We are all, forever and ever, Anonymous.